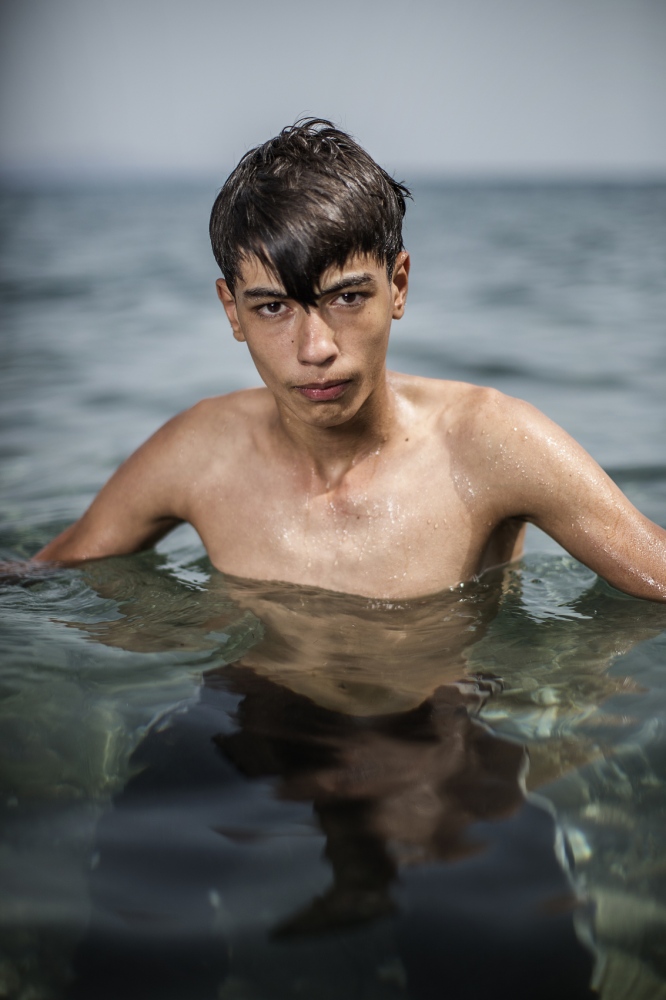 1 / 9
Mohamed Kuba, 16, Aleppo, Syria
-I left Syria two years ago and went to work as a BBQ chef in Turkey, and I was always black from soot.Â
I really liked Turkey but now I want to go to Germany and study.Â

I sleep in the streets here in Kos and swim all day while I wait for my transit papers from the police.

-The trip across from Turkey was horrible we weâ€™re 61 people in a nine meter long boat.Â
After 10 days here with still no papers there was a riot and I got struck with a knight stick.Â
I fled without my parents and now I want to go to Germany to Study. We Syrians love to study.Â 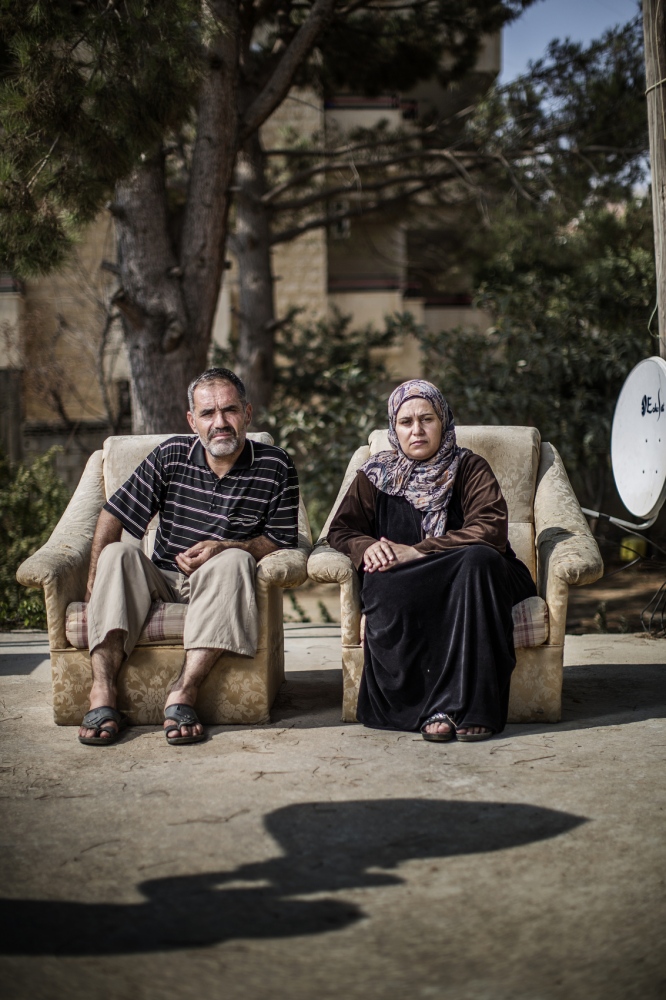 For how long have you been traveling and what route?

-I fled two years ago with my husband and two children.
Four months ago came to the refugee camp in Arsal on the border and we fled her to the Beqaa valley .

2. Tell us about your situation.

-We don't live, we can't afford anything.
I don't want to live this life. day passes without getting any real food to eat and I suffer when I see my paralyzed daughter cry.

3. What do you need right now? 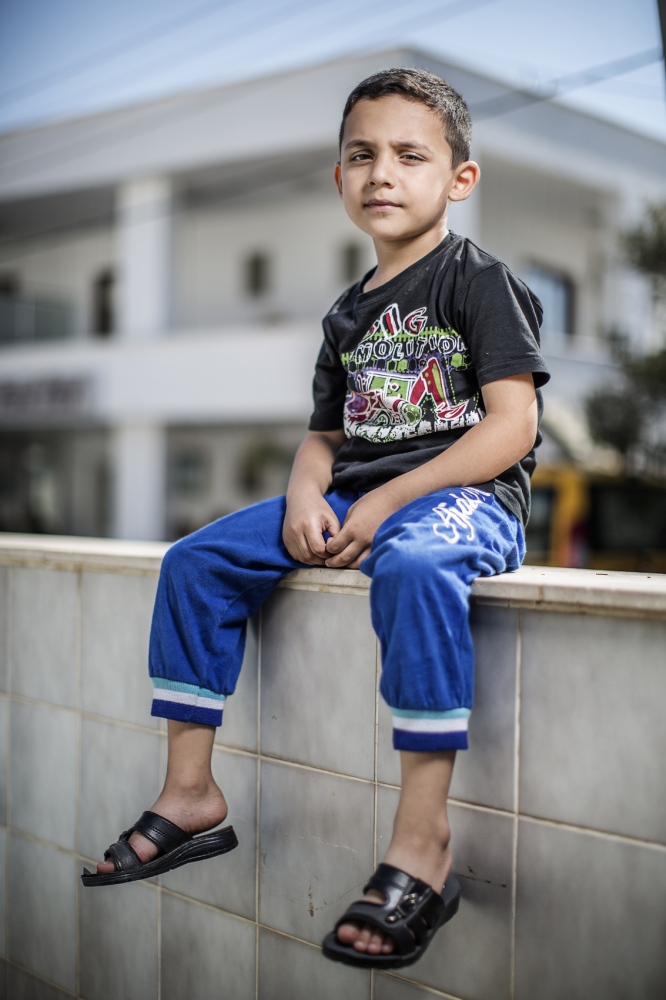 1. For how long have you been traveling and what route?
- One week with my father and brother.

2. Tell us about your situation.
-I miss my friends.

3. What do you need right now?
-I need to live as other children and play football. 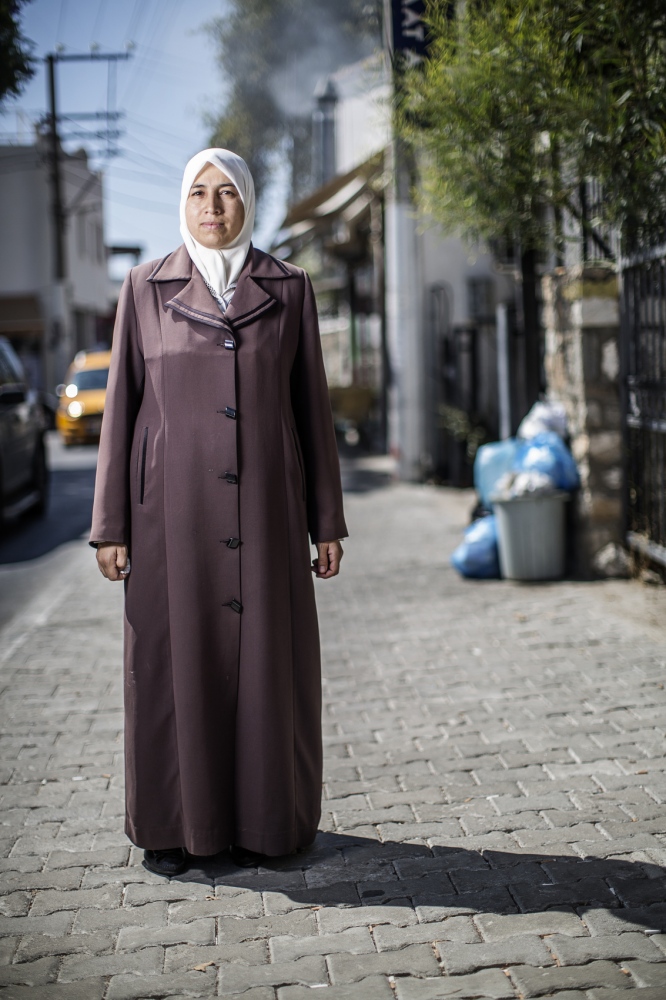 1) For how long have you been traveling and what route?

-We fled one week ago. First to Libanon and then to Turkey.

2) Tell us about your situation.

-We escaped the war, both you and the entire world knows that. We don't want to live in a war right know and the rest of the world must acknowledge that.

3) what do you need right now? 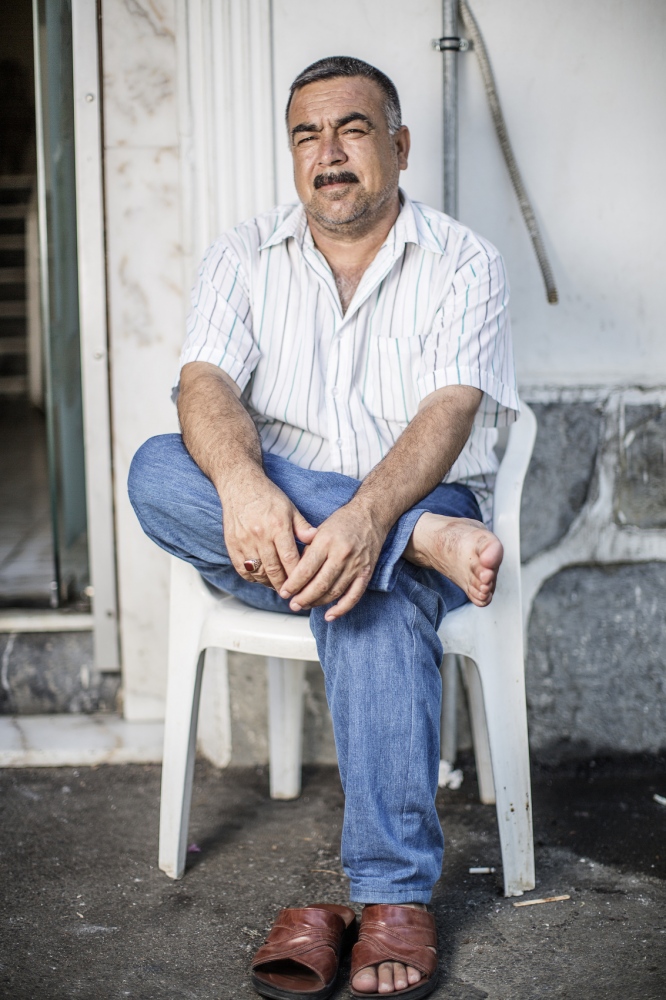 1.For how long have you been traveling and what route?
- I fled Iraq four days ago

2) Tell us about your situation.
-I served in the Iraqi army until i fled. The Iraqi army is controlled by Iran. I donâ€™t want to serve Iran.

3.What do you need right now?
- I want to go to a country without an army and people getting killed. 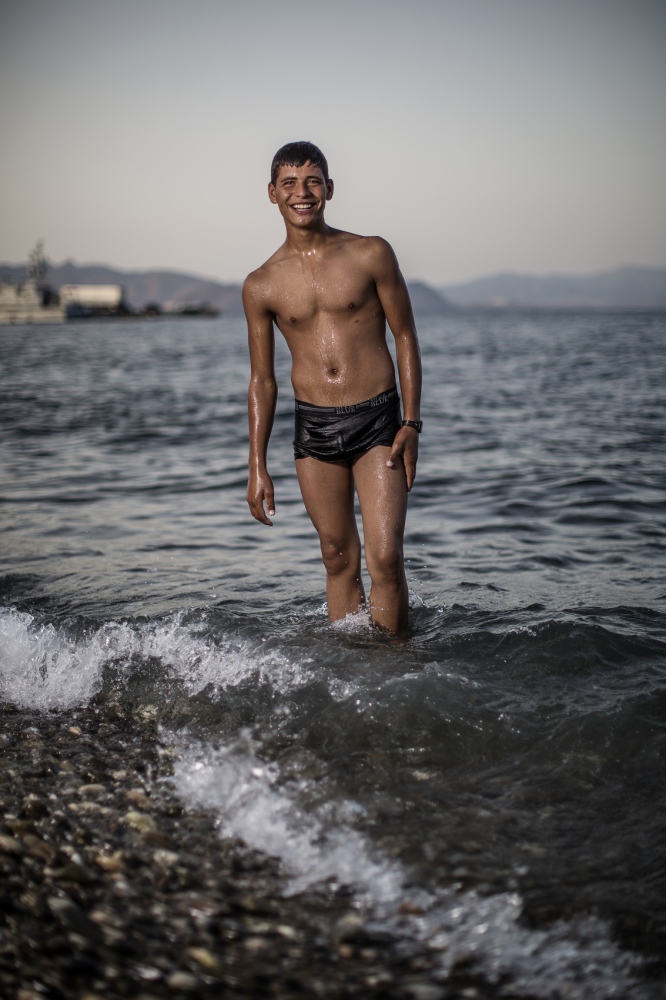 6 / 9
Adnan Azizi 16
Aleppo, Syria
we fled Aleppo 3 years ago and after that I worked as sheperd in Turkey. 10 days ago we left Turkey and came here toKos in Greece.
-I love the water and I swim and play in it 4 hours the only other option is to sit at the police station and wait for your transit papers.
_My dream is to come to Germany and get a big house and a Mercedes! 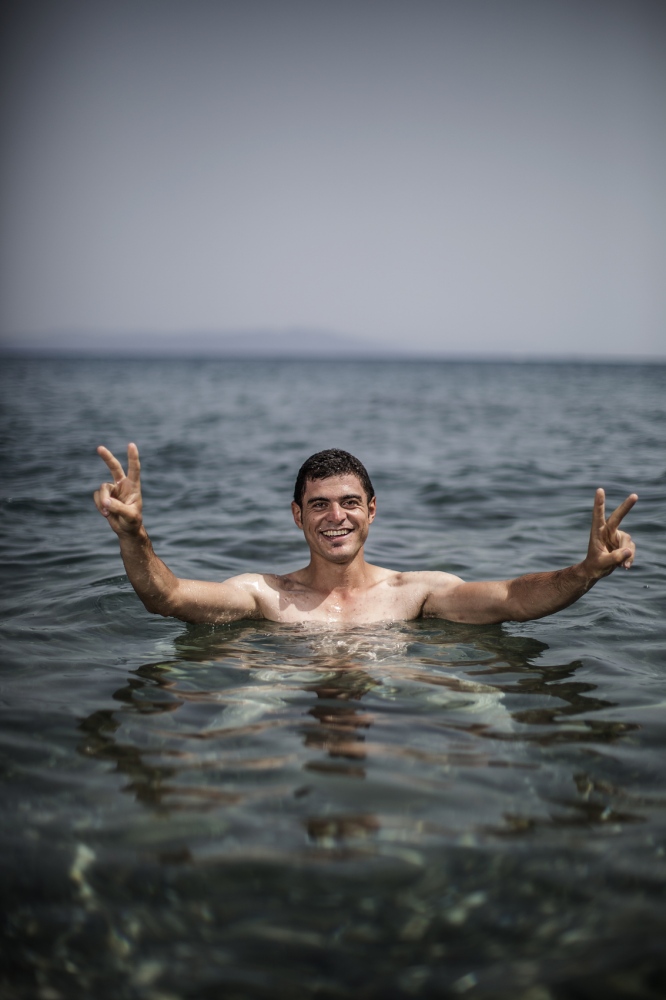 7 / 9
Mohammed Kuime, 28 years oldÂ
Â Syria
-I left Hamah three years ago and was a refugee in my own home-country until I reachedÂ TurkeyÂ one year ago. Eleven days ago I arrived here at Kos and now I'm waiting for my transit visa.

The boat ride over here was not that scary, I'm from Hamah, we're lions and not scared of anything. -To spend time in in the water is the best because I get the chance to forget about the pain caused of having your entire family get killed in the War. 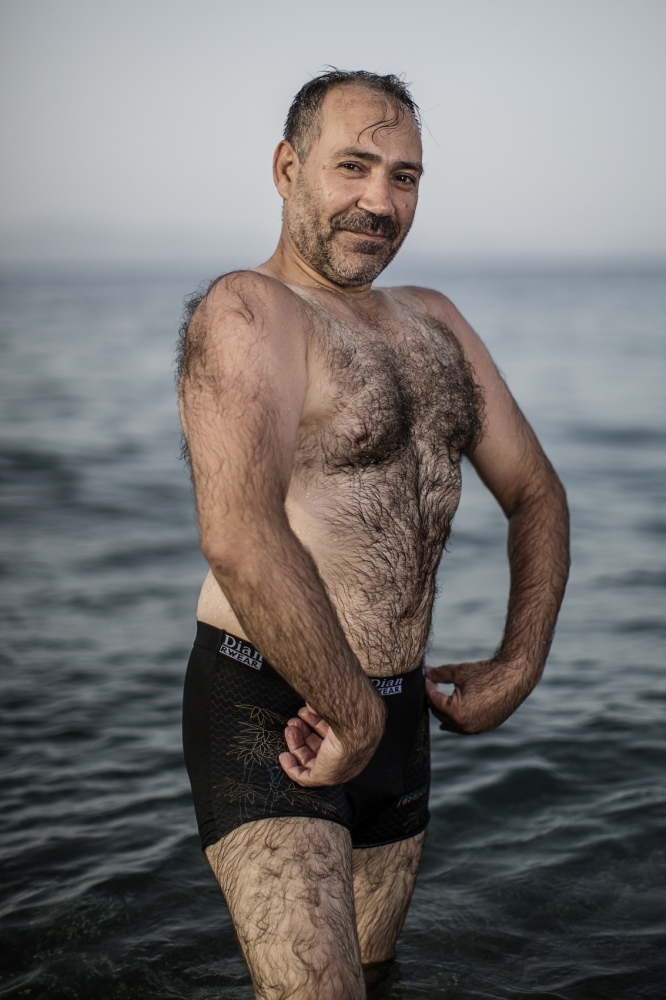 8 / 9
Hamid Assad Orfaley, 57 years old
Businessman from Aleppo, Syria
-I had a shop in Aleppo where I sold spare parts for Japanese cars. I used to live in Osaka in Japan for 20 years, the Japanese people loved me.
My goal is to go to Germany and open up a new shop.
I really like to be here in the water where I can forget about the war and all the problems in the world. 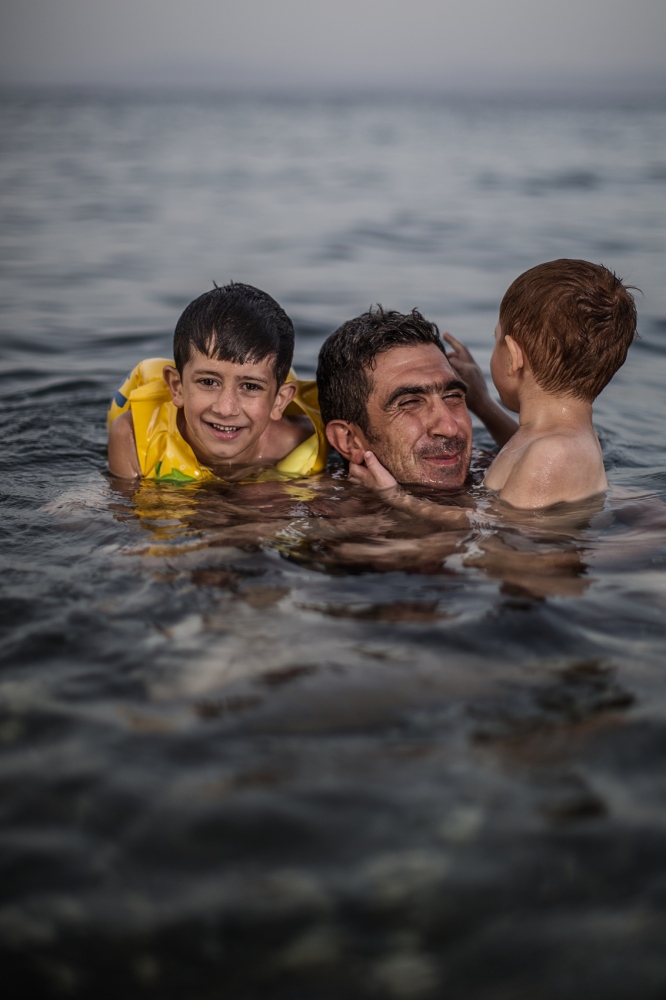 9 / 9
Amar Hag Omar, 36 years fromÂ AleppoÂ ,Â Syria
With his Children Mohammed 7 years and Yazan 5 years oldÂ
-We left Aleppo a month ago and 8 days ago We reached Kos.

-I'm worried for the sake of the children, I don't want the to grew up thinking getting bombed by Bashar Al Assad is a normal way of life. When we play together in the water we forget about the war for a moment. I wish we could swim every day

The story of refugees fleeing the Middle East is often told in numbers"59.5 million people displaced at the end of 2014, for example. While figures like this speak to the severity of the crisis, they fail to capture its humanity. Photographer Axel Oberg is working to change that by creating portraits of refugees that "show the people behind the numbers."

Oberg traveled to the Mediterranean in early September to meet with some of the people who have been driven out of their countries as a result of the brutal civil war in Syria and the advance of the Islamic State.

With these pictures, Oberg aimed to show "more of the person, less of the situation," and to present refugees in the same dignified manner he uses when taking portraits in New York. As a result, he says, these portraits remind us that refugees are "normal, working, middle class people" who want to live their lives but were forced out by war."